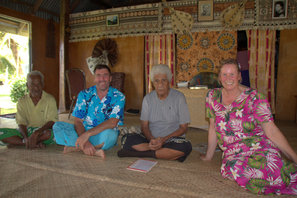 Andy started sailing at around 3-years old, in clinker built sailing boats hired while on family holidays in Cornwall. He was taught to sail by his father, Ray. In the Bristol Channel, at age 10, he raced in a Mirror dinghy, then sailed a variety of other racing dinghies: Hornet, Osprey, Enterprise, Laser, Fireball and Miracle. Andy started offshore racing in 1972 and over the next decade sailed Albin Ballad, Albin Vega, Warsash OD, Nicholson 32, Morgan Giles 44. Cruising was first sampled in 1976 and his real enjoyment was getting to new places under sail, experience was gained in a Nicholson 32, Nicholson 55, Hirondelle and Sabre 27.

Sue began sailing with her father, Graham, in Shropshire, at Elsmere Lake, initially racing a Heron dinghy at the age of 8, followed by a Mirror dinghy, then moved on to racing Miracle and Fireball dinghies. Sue helped her father build these boats. Her introduction to offshore sailing began in the Bristol Channel with Andy aboard a Hirondelle Catamaran he part owned with his father. After sailing predominantly on inshore waters, a rapid learning curve was ascended: currents of up to 7 knots, a 10-metre tidal range and short, steep seas when a strong wind opposed the current.

Sue and Andy’s first boat was a Wharram Tangaroa, named Kleva Kloggs; bought in the Bristol Channel, in 1984, and immediately sailed north to Lancaster near Morecambe Bay. The next decade saw them cruising to Scotland, Ireland, France, Belgium, Germany, Netherlands and Denmark. Limited windward performance and space restrictions saw them choosing a mono-hull for their next boat. Spruce, an Ohslon 38, a design proven in adverse ocean conditions by Clare Francis aboard “Roberston’s Golly” during a 1982 single-handed trans-Atlantic race, was purchased in 2002. The first six seasons saw more cruising in Ireland, English Channel and Biscay. Ocean sailing commenced in 2008 with a brief foray off the Biscay continental shelf and completion of their Yachtmaster-Ocean qualifying passages. That unique ocean blue was so captivating.

In 2009, Sue and Andy sailed Spruce to the East coasts of the USA and Canada via the Cape Verdes and Caribbean. A superb experience and the fulfilment of a long-standing dream to go blue water cruising. The bug had bitten deeply; their beloved Ohlson was changed in 2011 for the current vessel, the second Spruce, a Hallberg Rassy 42. They departed the UK aboard her in August 2011 and sailed directly to Madeira. Their route then went via the Canaries and Cape Verdes, visiting some different islands than during the previous trip, and on to the East Caribbean islands again. New seas were sailed as their course was set to the west. On to the Dutch ABC Islands, Columbia, Panama and through the canal into the Pacific Ocean.

Since departing the UK, on their first ocean voyage in 2009, they have sailed approximately 37,000 miles and visited many wonderful places. Future plans include Irian Jaya, Japan, Alaska and the west coast of North America to Mexico.
Sue and Andy set off cruising in 2009. The first 18-months took them to the Caribbean, Bermuda, USA and Canada. They took a short break in 2011 while they changed boats and then headed off towards the Pacific Ocean and beyond. Their current boat has added 23,000 miles to the original 12,000 travelled in the first Spruce. This site provides links to a blog, photo galleries and information about the boat and her equipment.